The Surgery that saved my sex life - Marie Claire, Feb 2009 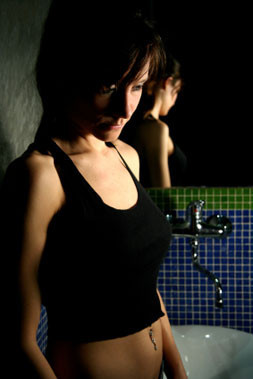 The Surgery that saved my sex life - Marie Claire, Feb 2009

Despite the boom in plastic surgery, one part of our bodies has remained untouched - until now. Here, a 37-year-old Brisbane woman explains to Lollie Barr why she chose to prettify her privates.

The bright summer sunshine streamed through the window as I lay naked on my new lover's bed during an afternoon lovemaking session one day in 2003. We had slept together a few times since meeting, but it had always been beneath the cover of darkness. Now, we were exploring each other's bodies in the full light of day. Michael*, 28, was a loud, well-built, gym-obsessed roofer, so I was already feeling slightly body conscious when he reached down and put his hands between my legs and suddenly started laughing. "Wow!" he exclaimed, as he tugged on my inner labia. "You've got a couple of Wiener schnitzels here!" A well of shame gushed up from inside me, turning me scarlet from head to toe.

I felt myself shrink inwardly and fought the urge to cry. To cover my embarrassment, I tried to laugh it off and pretend his cruel comment hadn't affected me. But inside, I was crushed.

After a few moments, we started kissing and making love again – even though my desire to have sex had vanished. From that moment on, every time we had sex I felt myself second-guessing Michael. Was my vagina going to turn him off? Was he thinking about how weird I looked? Did I repulse him? If he ever tried to go down on me, I would subtly manipulate the situation to focus on pleasuring him instead. Meanwhile, although our sexual relationship was pretty good, I often found myself more focused on the state of my vagina than the act itself. But it wasn't just when I was having sex.

Soon, I found myself constantly obsessing about my vagina: how it looked to others, how it felt. At the gym, I became aware that the seam of my tight-fitting work-out clothes sometimes rubbed against my labia, causing discomfort. Often, I had to adjust myself to feel confident that I looked symmetrical. After a while, I stopped getting changed in front of other women at the gym or the pool because I felt so self-conscious in swimmers. I started to view my body very negatively, and began swapping tight jeans for loose shorts and pants because I was worried I might have a "camel toe".

I had always been vaguely conscious of the fact that I was different from other girls whose vaginas were tidy and tucked away, whereas my inner labia were noticeably longer, and they protruded outside of my outer labia by a couple of centimetres. Then, when I was in my early 30s, I experimented sexually with a woman whose labia were absolutely tiny compared to mine. However, at the time, it never really bothered me. More recently, I'd even had a conversation with a girlfriend about the difference between an "outie" (where the labia hang out) and an "innie" (where they're all tucked away). But it wasn't until Michael made his cruel remark about my vagina that the shape of my vulva became a major problem for me.

Looking back, in the year we were together, my self-esteem took a battering. Michael was always criticising me about something – whether it was the shape of my knees or the size of my labia – and would even stretch my vagina's lips out and joke about their length. We eventually broke up in July 2004 and I moved from Sydney to Brisbane, where I did a lot of soul-searching about why I had put up with such an emotionally abusive man. I also tried to rebuild my self-confidence about my vagina. After all, I told myself, I had been with plenty of men in the past, and no-one had had a problem before.

Nevertheless, my paranoia persisted – especially now that I was single. On every date, I'd find myself mentally fast-forwarding to the moment we would be intimate for the first time, and be overcome with anxiety. I'm convinced I cut off potential boyfriends because I believed they would reject me. After a while, I had a couple of flings, but I always made sure there was subtle lighting and that they kept their heads above my waist, as I didn't want to scare them off. If they persisted, I'd make self-deprecating jokes in a kind of pre-emptive strike: "Don't go down there," I'd joke, while cringing inwardly. "I've got big flaps." My rationale was that it would hurt less if I made the first comment, rather than them.

Although both my lovers were really lovely and said they liked my vagina, I assumed they were only saying that to make me feel better.

Then, one day in early 2005, I was sitting in a dentist's surgery waiting for a check-up when I came across a magazine article about labioplasty, a surgery that reshapes the vagina. In it, a woman recounted how she'd had her labia reduced and how the operation had changed her life and given her the confidence she craved in the bedroom.

It was the first time I became aware that I could do something about it, and I decided then and there that one day I would have the operation ... just as soon as I could afford it, and overcome the psychological challenge of going to a plastic surgeon to discuss it.

Six months later, in November 2005, I met Jake*, 39, a gorgeous, caring architect, and we started a serious relationship. Once again, I followed form and made jokes about my vagina until, early on in the relationship, Jake asked me to show him what the problem was. I squirmed with embarrassment as I pointed out my "deformity". "They're beautiful," he said, gently. "I honestly don't know what you're worried about."

I desperately wanted to believe him, but I was too insecure and assumed that he was just trying to make me feel better. Soon, I found myself constantly talking about my misshapen vagina and the labioplasty operation. Jake thought I was crazy to consider it, but told me that he would support me in my choice.

Then, I started to seriously research a labia reduction on the internet, and soon found a reputable certified plastic surgeon in Brisbane.

With a sense of sheer terror, I turned up to my first consultation with Dr Paul Belt, who immediately made me feel at ease. He answered all my questions, including how much the operation would cost ($2000**, less private health insurance refund, plus there is a Medicare rebate if there is a functional reason for the surgery, such as to prevent chafing and itching). He also explained how long I would need to recover (one or two weeks off work) and how much it would hurt (the doctor described it as a "dull ache"). The most embarrassing part was showing him my genitalia, but he reassured me that it was very common for women to have larger inner labia. Apparently, there is a "bell-shaped curve" of labial lengths, with most labia minora being the same length as the labia majora, while some are smaller or larger.

He added that in the past decade increasing numbers of Australian women have undergone labioplasty surgery, and although a limited number of doctors perform it, he sees three women a month for a consultation. Dr Belt then asked me a lot of questions, such as if I was undertaking surgery for my partner or myself (to which I replied that it was my idea and choice).

From then on, I knew there was no turning back. So, five weeks later, in August 2008, I arrived at the surgery at 8am, sick with nerves, but relieved to be starting a new chapter in my life.

The doctor marked where the excision would take place on my labia with a texta, then took a photograph to make sure I was happy with how it would look, which was incredibly embarrassing. I was then given a general anaesthetic. During the half-hour operation, my labia were clamped, and the excess tissue removed with a scalpel before two layers of dissolvable sutures were inserted to keep the wound together.

When I left the surgery at lunch-time, my vagina was burning hot and excruciatingly painful. I had been advised to sit with a block of ice between my legs and take strong painkillers, but the pain was still intense, especially when I went to the toilet. As my labia were horizontally long, the surgeon had had to cut back to my perineum, so the urine burnt. Jake felt so sorry for me and was devastated by the fact I was so incapacitated. For the next few weeks, I had to shuffle instead of walk because my vagina was so sore and swollen, and I started to worry that the pain would never go away. I ended up having to take 10 days off work, and Jake and I couldn't have sex for six weeks, but soon the swelling went down.

When we finally made love, Jake was happy for me but rather nonchalant about my new vagina because it wasn't really a big deal to him. But for me, the difference was huge. With my new, tidy vulva, I felt so much more confident. I even encouraged Jake to go down on me and laid back and really enjoyed it, although there was no actual change in sensation. I felt free, especially now that I was liberated from the self-critical, internal dialogue I had always run through my head during sex. Suddenly empowered, I felt more womanly than ever. As painful as the operation was, I don't regret it for an instant.

Sadly, Jake and I broke up in October. I had been toying with the idea for a while and realised he wasn't the guy I wanted to spend the rest of my life with, so I'm single again. I haven't slept with anyone else yet and, although I'm not in a rush, I'm looking forward to it, as I finally feel confident about how I look down there.

More information on the relevant procedure can be found here.

Back to news and media